Celebrating Simms: The Story of the Lucy F. Simms School 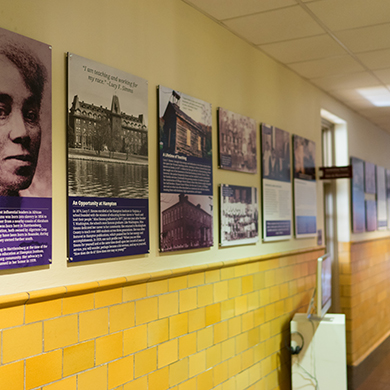 The Lucy F. Simms School, named after a formerly enslaved woman and famed Harrisonburg educator, was built in 1938 to serve African American students from all over Rockingham County and the Shenandoah Valley. When integration came to Harrisonburg in 1965, the school closed, many of the school’s teachers lost their jobs, and many African American residents felt that an important center of community life had been lost. In 2005, the building reopened as a community center, and former Simms students were finally able to use the space again, even though little visible trace of the school they had known remained. In 2015–2016, the Celebrating Simms project came into being with the goal of transforming what many community members described as a site of loss into a site of celebration.

In order to mobilize the labor necessary to make this goal possible, the original Celebrating Simms project took shape as a community engagement initiative supported by a Fall 2015 research internship and as a Spring 2016 seminar hosted by James Madison University’s Institute for Visual Studies, and led by Dr. Mollie Godfrey (English) and Dr. Seán McCarthy (School of Writing, Rhetoric & Technical Communication). Over the course of the year, we conducted research in local archives, interviewed local residents, scanned private photographs, and designed over sixty large panels telling the history of African American education in Harrisonburg, Virginia, with a focus on the school’s place at the heart of community life.

We are currently working on In Simms 2.0. Here, we propose to grow this project and its public research potential by expanding and enriching the photographic archive that made the original exhibit possible. We plan to do this by hosting six public events that are designed to collect further archival materials for digitization and publication to the archive, and to use these materials to expand the already existing exhibit. The goal of this expansion is to increase not only the number of preserved historical materials that are available to the public and the number of people contributing to and making use of the project, but also to facilitate the inclusion of a plurality of stories that can act as a complement to the narrative of the original Celebrating Simms exhibit.

Godfrey and McCarthy have written about the project for the journal Public: A Journal of Imagining America. They are currently writing a collaboratively-written essay with their community partners for the Community Literacy Journal.