Created by the family of the beloved Julian Clement Chase, the Julian Clement Chase Prize recognizes and honors undergraduate writers at The George Washington University who have looked around themselves and brought back fresh impressions and new learning, about Washington, D.C., and in so doing, weave university and city ever more securely together. The family intends the prize to recognize and honor appetite, boldness, the striving toward humane excellence, and the building of community. 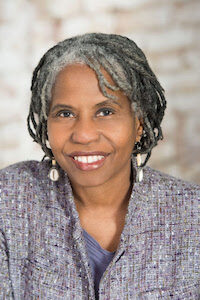 Brigette Rouson, J.D., M.A., (she/her) is principal of Rouson Associates, a consulting practice formed to support policy advocacy, then turning to broader capacity building. She brings over 30 years’ experience advancing nonprofit effectiveness toward a just society. Brigette is a member of the RoadMap network of social justice consultants, having served on its leadership teams for over 5 years. She is deeply committed to bringing an equity frame to organizational change and leadership development, facilitation, training, action research, and public speaking.

Brigette has designed and supported many initiatives to transform groups, community and society — which includes planning and facilitating hundreds of sessions. Her work centers racial justice and intersectionality. She has worked with more than 250 groups on strategic planning, staff development, board development, nonprofit advocacy, as well as making equity front and center. She has consulted independently and with colleagues, including staff positions at Management Assistance Group (now Change Elemental), Mosaica: The Center for Nonprofit Development and Pluralism, Maryland Nonprofits – and its national Standards for Excellence Institute.

Formerly, as national program director of Alliance for Nonprofit Management, Brigette co-led a capacity builders of color network that sparked the Cultural Competency Initiative, for which she was a presenter and trainer, book co-author and project manager, and in a pivotal staff role to set professional standards moving the field toward equity. Brigette has worked in philanthropy to support increased power-sharing across racial/ethnic, generational, LGBTQ and other cultural identities. At Ms. Foundation for Women, she led a $4 million multi-year grantmaking and capacity-building collaborative for girls’ and young women’s leadership, with support to 14 community groups rooted in African (Black), Indigenous, Latina, Asian and Appalachian (White) cultures.

Brigette is a proud graduate of Howard University (B.A.), Georgetown University (J.D.), and University of Pennsylvania (M.A.) where she completed coursework toward a Ph.D. in communications and culture. She is a DC Bar member. Community leadership includes serving as a co-founder and board of instigators member of Diverse City Fund – a grassroots grantmaker for social justice work by global majority people in DC – and represents the fund in helping form and advance the work of a regional grantmakers group that centers Black liberation, Resourcing Radical Justice. Brigette is also an elected board of social action member for her faith congregation, and actively involved in advocacy, organizing and other liberation groups.

Brigette is dedicated to learning and thought leadership, serving as keynote speaker for regional and national convenings such as Alliance for Nonprofit Management, session leader at grantmaker and capacity builder conferences, and participant in gatherings by Facing Race, Equity in the Center, among others.

Chase Kleber for his capstone essay Sundays in the Park an analysis of the drum circles in DC’s Malcolm X/ Meridian Hill Park with a particular focus on sound.  Kleber explains his project this way:

“I seek to study space, specifically being Meridian Hill/Malcolm X Park – this designated, bordered, and monitored land – and I wish to encounter the various ways of being in it with a careful approach to sound. I highlight the importance of care, as I require methods beyond an objectifying imperial gaze.” 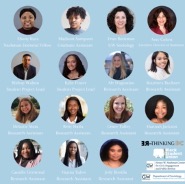 Honorable Mention to the scholar-cohort  Rethinking DC Youth and Policing Project.  Bishop Walton, Kylie Foster, Ale D’agostino, Kourtney Buckner, Melanie Mata, Betty Hailu, Grace Tulley, Hannah Jackson, Camile Germinal, and Hanna Yalew. These ten scholars, working collaboratively with GWU Black Student Union, the GW Nashman Center (GW’s hub for civic engagement), the Sociology Department, and the Metropolitan Police Department, are researching how to drive down youth arrests in DC and divert children from the justice system. The projects are still in-progress, and we want to acknowledge how fully they meet the spirit of the Prize by linking GWU research and resources with the concerns and communities within the City. 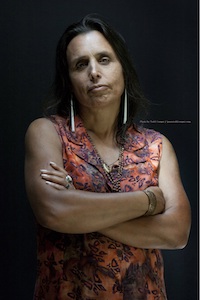 Winona LaDuke is an internationally renowned activist working on issues of sustainable development, renewable energy, and food systems. She lives and works on the White Earth reservation in northern Minnesota, and is a two time vice presidential candidate with Ralph Nader for the Green Party.

As Program Director of Honor the Earth, she works nationally and internationally on the issues of climate change, renewable energy, and environmental justice with Indigenous communities. And in her own community, she is the founder of the White Earth Land Recovery Project, one of the largest reservation based non-profit organizations in the country, and a leader in the issues of culturally-based sustainable development strategies, renewable energy, and food systems. In this work, she also continues national and international work to protect Indigenous plants and heritage foods from patenting and genetic engineering.

In 2007, LaDuke was inducted into the National Women’s Hall of Fame, recognizing her leadership and community commitment. In 1994, LaDuke was nominated by Time magazine as one of America’s fifty most promising leaders under forty years of age.  She has been awarded the Thomas Merton Award in 1996, Ms.Woman of the Year ( with the Indigo Girls in l997) , and the Reebok Human Rights Award, with which in part she began the White Earth Land Recovery Project. The White Earth Land Recovery Project has won many awards- including the prestigious  2003 International Slow Food Award for Biodiversity, recognizing the organization’s work to protect wild rice from patenting and genetic engineering.

A graduate of Harvard and Antioch Universities, she has written extensively on Native American and environmental issues.  She is a former board member of Greenpeace USA  and is presently an advisory board member for the Trust for Public Lands Native Lands Program as well as a boardmember of the Christensen Fund. The Author of five books, including Recovering the Sacred, All our Relations, and a novel- Last Standing Woman, she is widely recognized for her work on environmental and human rights issues.